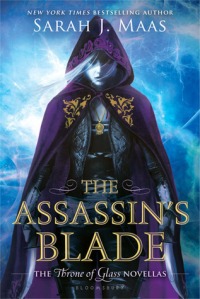 Synopsis: Celaena Sardothien is Adarlan’s most feared assassin. As part of the Assassin’s Guild, her allegiance is to her master, Arobynn Hamel, yet Celaena listens to no one and trusts only her fellow killer-for-hire, Sam. In these action-packed novellas – together in one edition for the first time – Celaena embarks on five daring missions. They take her from remote islands to hostile deserts, where she fights to liberate slaves and seeks to avenge the tyrannous. But she is acting against Arobynn’s orders and could suffer an unimaginable punishment for such treachery. Will Celaena ever be truly free? Explore the dark underworld of this kick-ass heroine to find out.

When I read this for the first time in 2018, I was convinced that I was going to rate this very low. I typically don’t like novellas because I feel like there usually isn’t enough information in them and things aren’t explained well enough for me.

The Assassin and the Pirate Lord

As the first book in this set of novellas, The Assassin and the Pirate Lord sets up the premise for the rest of the novellas. Everything that happens in the later novellas as well as the rest of the series, plays off of these. Novellas aren’t my favorite. I don’t think they ever will be something I fully enjoy, but I can’t get enough of the ones in the Throne of Glass series.

The Assassin and the Pirate Lord is one of the shorter stories in the bind up, but still packed a punch for me. It introduces us to Sam who plays a huge part in Celaena’s overall story line. The beginning of this one was a little slow for me, but by the end I was super invested in the story and couldn’t put it down.

For this novella, Celaena and Sam are sent to the Pirate Lord to deliver a letter. The two believe they are sent there for one reason, but find out that they were sent for a very different one.

“Why?” Sam stepped close enough that she needed to tilt her head back to see his face. “We’re assassins. We kill people. We destroy lives everyday.”

Celaena wanting to save the slaves really shows a lot about her character. It shows that while she is cocky, brave, and vain, that she also cares deeply about those she’s closest with as well as those who need it.

As for the characters, I enjoyed seeing into their pasts. I still wish we learned a little more about Rolfe because his part of the story line later on in the series is so interesting to me.

The ending of this novella definitely had be swooning a little bit. Even knowing the inevitable outcome, I still can’t can’t help but to swoon over Sam.

“She lifted her chin. “I’ve been shouting for you.”
Sam shrugged, sauntering over to her. “I figured you could wait a few minutes, given that I saved the day and all.” His brows rose high on his ash-covered face.
“Some hero.” She gestured to the ruin of the tower around them. “I’ve never seen such sloppy work.”

Overall, I would give The Assassin and the Pirate Lord a 3 to 3.5/5 star rating. It was interesting and the plot of it is important later on, but had me a little bored until the action really started happening.

The Assassin and the Healer

The Assassin and the Healer is the shortest of the five novellas and honestly felt a little pointless to me. While I do appreciate being introduced to Yrene, I felt the overall story felt like a filler story compared to the other stories in the bind up. Even knowing what I know about her later in the series, I still kind of care less about this novella.

“For wherever you need to go – and then some. The world needs more healers.”

I do appreciate the interaction between Celeana and Yrene. As with all the interactions in this story, it is an important one. I wish we could have seen more of Yrene and had more of a story line. I feel like if this novella was even around the same length as The Assassin and the Pirate Lord, it would have fared better for me.

In the end, I would give The Assassin and the Healer a 2.5/5 star rating. It needed a bit more for me to really enjoy it, but I do appreciate what it brings to the story overall since I have read the entire series and know the overall outcome of it all.

The Assassin and the Desert

This is another one that was slow for me for awhile. As it went on, I grew to love it so much and after reading all the books, I absolutely love how this story comes into play later on in the series.

The Assassin and the Desert follows Celaena on her punishment mission. She is sent to the Silent Assassins and is tasked with getting a letter of recommendation from the Mute Master. Throughout this story we also see her come to terms with everything that’s happened to her and that they are not normal or okay. It’s a very thought provoking story on the subject of abuse.

“When you give your master his letter, also give him this. And tell him that in the Red Desert, we do not abuse our disciples.”

This novella also introduces us to Ansel. During her part of the story we also meet an Ironteeth witch and spider silk. Both of these become huge parts of the story later one so it was great to reread this story and remember how it all started.

“I think you will leave a lasting imprint on Ansel’s heart. You spared her life, and returned her father’s sword. And maybe when she makes her next move to reclaim her title, she will remember the assassin from the North and the kindness you showed her, and try to leave fewer bodies in her wake.”

Overall, I would give The Assassin and the Desert 4/5 stars. It might have been a little slow, but this is such a great story and has some amazing character growth.

The Assassin and the Underworld

The Assassin and the Underworld is my favorite of the five novellas in the bind up. This story definitely made me love and hate certain characters. Celaena is back from the Red Desert and it’s everything I could ever want. The moments between Sam and Celaena are amazing and some of my absolute favorite parts.

“I love you,” he repeated, shaking her again. “I have for years. And he hurt you and made me watch because he’s always know how I felt, too. But if I asked you to pick, you’d choose Arobynn, and I. Can’t. Take. It.”

The Assassin and the Underworld definitely gets a 5/5 stars from me! Perfectly paced for me and is such an important stepping stone to everything that happens later in the series.

The Assassin and the Empire

Oh, the last novella. Even though I’ve read the series and know exactly what happens, this novella still breaks my heart. I really enjoyed the moments between Sam and Celaena in the apartment.

Even though I just read this last June, I forgot how early on in the novella certain things happen. I appreciate how connected everything is and definitely think it explains why Celaena is the way she is.

“My name is Celaena Sardothien,” she whispered, “and I will not be afraid.”

Overall, I would give The Assassin and the Empire 4/5 stars. This is definitely a perfect set up to the beginning of Throne of Glass.

View all posts by Felicia