Each month this year, I’m reading three books from a list of the lowest rated books I physically own. This list as thirty-six books on it and I have sorted it further into three categories based on where they fall on the list and putting the titles on pieces of colored paper. The first twelve on the list are on pink, the middle twelve are on green, and the bottom twelve are on blue. Each month, I will pick one of each color from a jar and those will be the three books I’ll read during the month.

For January, the three books I picked out were: 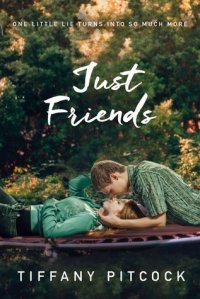 Synopsis: Jenny meets Chance for the very first time when she is assigned as his partner in their Junior Oral Communications class. But after they rescue a doomed assignment with one clever lie, the whole school is suddenly convinced that Little-Miss-Really-Likes-Having-A’s and the most scandalous heartbreaker in school have been best friends forever. It’s amazing how quickly a lie can grow―especially when you really, really want it to be the truth.

With Jenny, Chance can live the normal life he’s always kind of wanted. And with Chance, Jenny can have the exciting teen experiences that TV shows and movies have always promised. Through it all, they hold on to the fact that they are “just friends.” But that might be the biggest lie of all.

Review: This is the first book I’m reading from the 36 Lowest Rated Books I own. Being that it was the first of the list of books I’m reading this year, I wasn’t quite sure what to expect. I don’t typically keep average ratings in mind or even look at them before reading a book, but with this challenge for myself for 2019, I’m very much aware of the average rating of these 36 books.

I went into this one not really sure what to fully expect. The synopsis really didn’t tell me much and I’ve never really heard anything about this book. I’m someone who reads a lot of contemporary. Keeping that in mind, I typically know early on if a contemporary book is going to be for me or not.

Just Friends starts out on the first day of the main character’s Junior year. In their Oral Communications class, students are paired up for assignments and it’s teacher’s choice so they’re stuck with who they get. Jenny and Chance meet for the first time when they’re paired up, but then a “clever” lie saves the assignment and starts a friendship. The two main characters have very different personalities. Jenny is more of the stay indoors and study, which Chance is known as a playboy and outgoing.

In regards to the plot, nothing really surprised me. I assume most people can guess what the ending will be. I did enjoy the pacing though. I never felt like the story was being rushed or that things were dragging.

My star rating went down as the story went along when the story had anything to do with Chance’s family or home life. I couldn’t believe that a parent would just up and leave their child at home alone with only leaving a two line note behind. I think I would have enjoyed this story more if it hadn’t included a family drama aspect.

Overall, it was enjoyable and entertaining, but isn’t a new favorite.

Synopsis: Sophia has seven days left in Tokyo before she moves back to the States. Seven days to say good-bye to the electric city, her wild best friend, and the boy she’s harbored a semi-secret crush on for years. Seven perfect days…until Jamie Foster-Collins moves back to Japan and ruins everything.

Jamie and Sophia have a history of heartbreak, and the last thing Sophia wants is for him to steal her leaving thunder with his stupid arriving thunder. Yet as the week counts down, the relationships she thought were stable begin to explode around her. And Jamie is the one who helps her pick up the pieces. Sophia is forced to admit she may have misjudged Jamie, but can their seven short days of Tokyo adventures end in anything but good-bye?

Review: I really thought I was going to like this story. From the synopsis it sounded like it was going to be a cute story, but as I started reading it, I quickly realized my thoughts on this book were going to be wrong.

My first issue with this book was the nickname the main character was given. Throughout the entire story, Sophia is called “Sofa” by her friends. Of all the nicknames a friend could be given and she’s called Sofa. This bugged me so much and had me groaning whenever she was called this.

Another issue I had was this weird love “triangle.” I use quotations around that because at one point I seriously thought about drawing a diagram to figure out who liked who and who was in a relationship with who. It was very confusing and honestly wasn’t needed. I don’t mind a love triangle, but this just confused me and drove me a little insane.

Another I had is all the poor relationships in Seven Days of You. Throughout the entire story, which is only over a seven day time period, the interactions between Sophia and the other main characters just lacked a lot to be desired. Sometimes it was hard to believe that she’s supposed to be 17 because sometimes it seemed like she was around 10.

My final issue in this story is the parents. I guess I should say the lack of parents actually. I’m not sure why many authors write their stories and include parents, but don’t actually include them. Countless times during this story Sophia and her friends would just take off and be gone all night and Sophia’s mother never did anything and there were never any consequences.

For these reasons, I gave Seven Days of You a 2/5 star rating. I could not wait to finish the story and that’s a good indicator it’s a low star rating for me.

Jayin Ijaad is in hiding. A witch with powerful abilities, she carves out a life for herself in the slums of Pavaal, a city rotting from the inside out. When an old acquaintance tracks her down, Jayin is dragged back into a world she tried to escape — and is determined to escape again.

Maddix Kell is on the run. After two years in prison for crimes he did not commit, Maddix escapes and seeks out a legendary order of witchhunters who are his only chance to find justice.

But all is not as it seems and Maddix soon finds himself on the run from the people he sought as allies. When their paths collide, Jayin and Maddix must put aside their prejudices and forge an uneasy alliance that could crumble at any moment. But if they want to survive in Aestos — a brutal kingdom where magic and corruption lie hand in hand and enemies lurk around every corner — they must first survive each other.

Review: Catching Stars had what I thought would be an interesting story, but didn’t really grab my attention the way I thought it would. My review for this one won’t be as long as the previous two books were, but that’s mostly because even after just recently finishing the story, I’m not really sure what exactly happened.

It could be more interesting to others who are more into this genre, but it wasn’t for me. Overall, I gave this story a 3/5.

Final Thoughts: I honestly had high hopes for most of these books, but sadly was disappointed by all of them. Out of the three, Just Friends is probably my favorite of them, but even that one wasn’t completely amazing to me. Here’s to hoping next month brings some more enjoyable choices!

View all posts by Felicia